Giles contains 50 miles of the Appalachian Trail and it passes through the county seat of Pearisburg and the Town of Narrows which are now both official Appalachian Trail Communities. Starting in the spring, many hikers stop by on their journey for a little rest, good food and to re-supply on necessities.

Read the AT Journals “Natural Synergy”  and “A Hole Lot of Love” by Wendy K. Probst, “The Mountains and the River” by Laura Belleville and “A Clear view of History” by Leanna Joyner
~Courtesy of the Appalachian Trail Conservancy 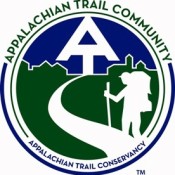 The Appalachian Trail, which runs from Georgia to Maine, cuts through Giles County and offers the visitor an opportunity to hike portions of the trail and see the natural beauty of Giles.

The footpath covers more ground in Virginia that it does in any other state, following the crest of the Blue Ridge Mountains in West Virginia all the way south to the Tennessee and North Carolina borders. 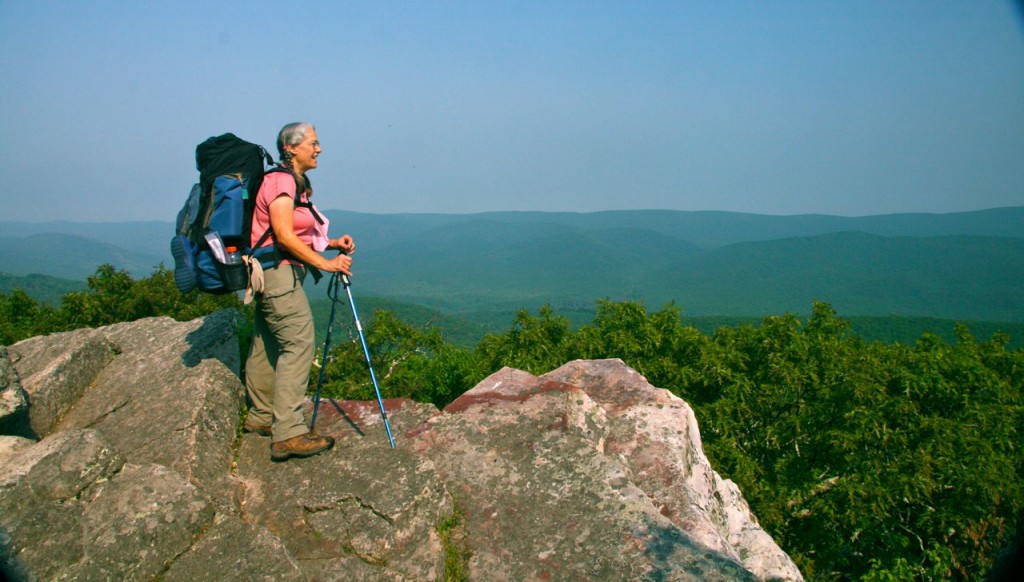 The entirety of the trail is 2,174 miles long and runs along the ridges and valleys of the Appalachian Mountains from the summit of Mount Katahdin in north central Maine to the summit of Spring Mountain in northern Georgia. It passes through fourteen states – Maine, New Hampshire, Vermont, Massachusetts, Connecticut, New York, New Jersey, Pennsylvania, Maryland, West Virginia, Virginia, Tennessee, North Carolina, and Georgia. Along with these fourteen states it passes through eight national forests, six national parks, and many state and local parks. It reaches its highest elevation of 6,634 feet on Clingmans Dome in the Great Smoky Mountains.

The idea for the trail came from Benton MacKaye, an off-and-on federal employee, educated as a forester and self-trained as a planner. He proposed the trail as the connecting thread of “a project in regional planning.” He also envisioned a trail along the ridge crests of the Appalachian Mountains from New England to the Deep South, connecting farms, work camps, and study camps that would help ease tension from industrial stress.

Volunteers developed the trail and completed it in 1937 with the exception of minor alterations. In 1968, the National Trails System Act designated the Appalachian Trail as a national scenic trail. Federal or state ownership of land or rights-of-way also protects the trail. No fee is charged nor is special permission needed to hike anywhere on the trail itself, although in some high-use areas, registration is required for overnight stay and fees may be charged for use of shelters and other constructed facilities. 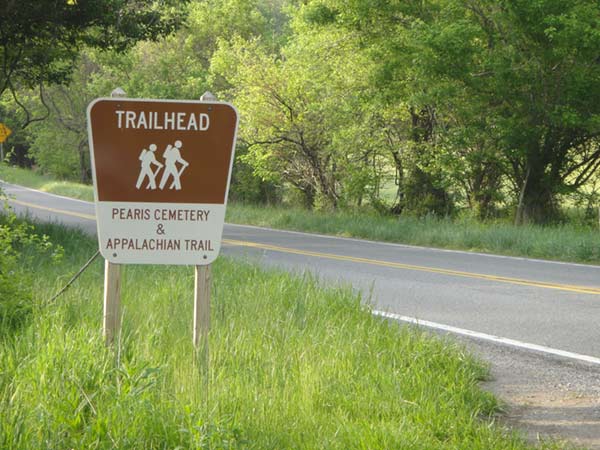 The entire footpath is marked with white blazes, two-inch by six-inch rectangles, painted on trees and rocks. A series of three-sided lean-tos or shelters are spaced about a day’s journey apart, even closer in numerous areas, and are available by a rule of first-come, first-served. Hikers can access water through many springs and streams along the trail. The trail also passes through or near many towns where long-distance hikers can stop, as they do in Pearisburg.

More than four million people use some part of the Appalachian Trail yearly. Most hike only short distances lasting from an afternoon to a weekend. Thousands of hikers hike the entire trail in sections over a period of years. There are, however, the hardy individuals, numbering around 2,500, who attempt to backpack the entire trail in one continuous journey each year. 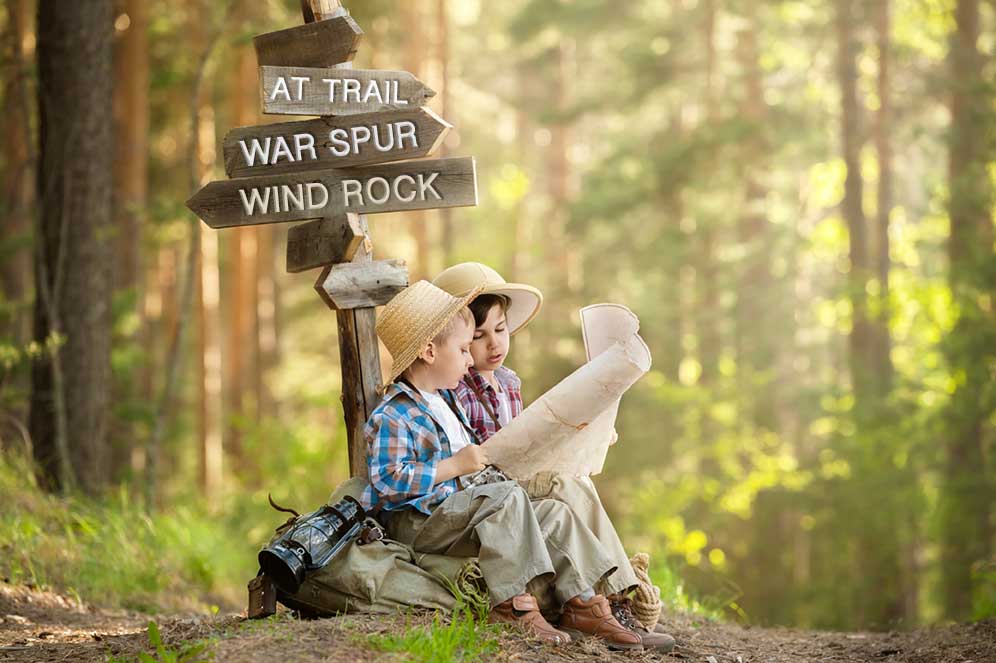 Hike the Appalachian Trail 1 1/2 miles up Pearis Mountain to a scenic overlook. The Appalachian Trail ascends the northern end of Pearis Mountain. At the top, the Angels Rest Trail (a blue-blazed trail) leads 50 yards to view rock, with views of the New River Valley, Pearisburg, and Peters Mountain on the left; Butt Mountain at the center right; and Bald Knob at the extreme right. The trail passes through many thickets of rhododendron and azalea on top of the mountain. Follow the trail around the edge of Pearis Mountain to a rock ledge overlooking Wilburn Valley and the mountains to the east.

Driving Directions: From Blacksburg, follow VA 460 west to VA 100 at Pearisburg. Turn right onto Johnston Avenue (Beside the Dairy Queen). Take the next right onto VA 634 (Morris Avenue) and follow approximately 1/2 mile to where the Appalachian Trail crosses VA 634. There is limited roadside parking.

Rice Fields | Giles | Day Hike – Out and Back 5.2 miles – Moderate to Strenuous

The Appalachian Trail ascends Peters Mountain and follows the ridge line. The crest of the Peters Mountain ridge is the West Virginia – Virginia state line. The ascent to the ridge is more gently graded than other A.T. climbs, but it is uphill the whole way with just over 1,000 feet of elevation gain. The destination for this hike is Rice Fields, an extensive mountaintop meadow with rock outcroppings that offers sweeping views to the west, north, and south.

Driving Directions: From I-81 Exit 118B, follow Rt 460 west. Cross the New River on Senator Shumate Bridge near the Celanese industrial site. Turn right on Rt 641 (Clendennin Road). In 2.3 miles, look for a large brown-and-white sign for Pocahontas Road. There is limited parking available along the shoulder of Clendennin Road. Follow the white A.T. blazes along Pocahontas Road for a short distance, and look for the Trail heading up the hill via a set of wooden steps on your left, soon after you cross a cattle grate.

Appalachian Trail: Stony Creek Valley to Stillhouse Branch is a 17.6 mile point-to-point trail located near Ripplemead, VA. The trail is rated as moderate and primarily used for hiking.

Appalachian Trail: Sugar Run Gap to Pearisburg is a 7.1 mile moderately trafficked loop trail located near Pearisburg, VA that features beautiful wild flowers and is rated as moderate. The trail is primarily used for hiking, walking, nature trips, and birding and is accessible from March until October.