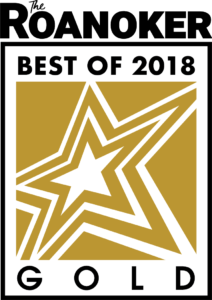 Blue Ridge Country Magazine: “We are proud to announce that Front Giles Co. VA COC has won the following in our 30th Anniversary “Best of the Mountains” reader poll: 1st Place: Favorite Waterfall (the Cascades)”

The Cascades won the GOLD AWARD for Best Short Hike, as voted by readers of The Roanoker. 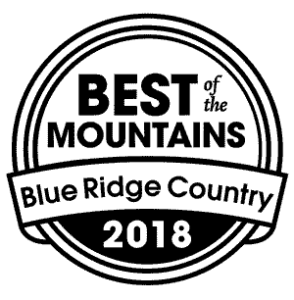 One of the most visited falls in Virginia 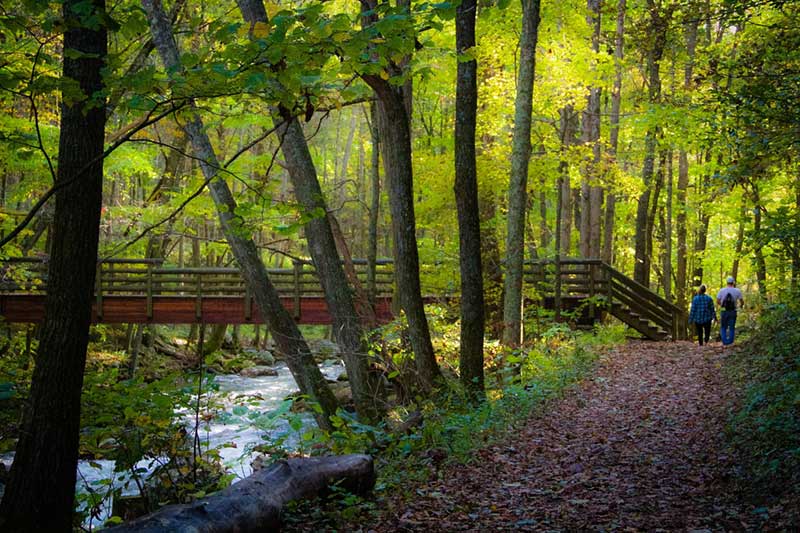 About 150,000 visitors a year visit the Cascades. Without question, Cascade Falls is one of the most beautiful waterfalls in Virginia and possibly on the entire East Coast. Little Stony Creek falls over a vertical cliff in several different streams. Several streams cascade a couple times on the way down while others fall the whole distance of the falls.

The 69 ft. falls crash into a large pool surrounded by two hundred foot cliff walls from which large ice formations hang in the winter. The scene is both breathtaking and peaceful as the falls combine both power and beauty. The falls are also fairly easy to view, with wooden stairs and platforms on one side of the pool allowing a visitor to get very close to the falls as well as allowing a photographer many different angles for photographs. 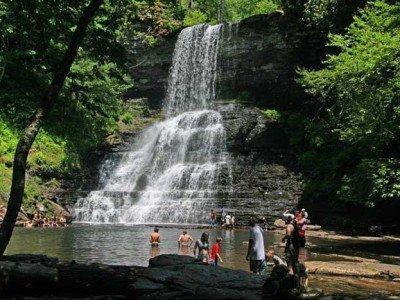 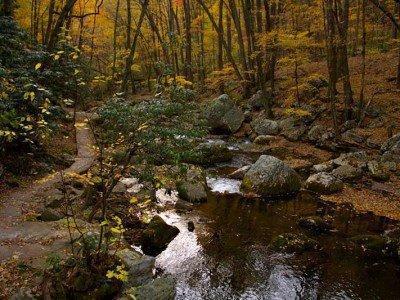 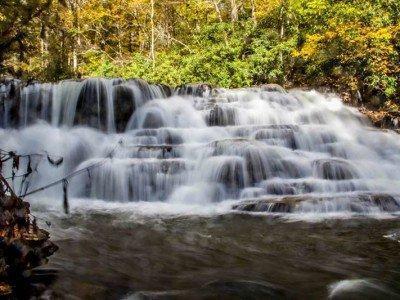 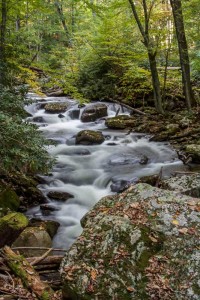 The Upper Trail is a beautiful hike with scenic, aerial views of Little Stony Creek. But, it’s only half of the well-loved four-mile loop.

Picking its way along the banks of Little Stony, the Lower Trail pauses at the edge of buggy backwaters and hangs over gushing cataracts. It winds its way through families of moss-covered boulders and cuts through rhododendron thickets. The roar of Little Stony is its constant companion as it climbs toward the main waterfall.

The spectacular views from the Lower Trail are as beautiful as the Cascades. It takes four bridges and innumerable stone steps and walkways to give visitors this experience. The original trail, built in the 1960s, was so artfully constructed that it seemed to belong there. 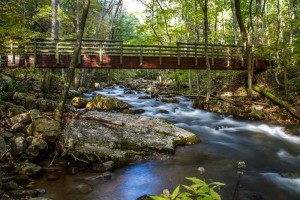 In 1996, melting snow and heavy rains turned Little Stony into a raging torrent. When the waters receded, three of the bridges and much of the trail were missing. The U.S. Forest Service allocated $400,000 to rebuild the trail and make improvements at the trail head.

They turned to Charlie Dundas, whose company, West Virginia-based Tri-State, had done a good bit of repair work to the trails over the years. Dundas said the Forest Service liked his plan to rebuild the trail without heavy equipment, and thus disturb the land as little as possible. When he began, a quarter of the two-mile trail had been destroyed.

“Certain key areas were just totally gone,” Dundas said. “It [the flood] scoured it down literally to bedrock.” In some places, the old trail was resurrected, in others all new trail was built. A few ghosts of the old trail remain — stone steps that survived the flood but now lead nowhere. 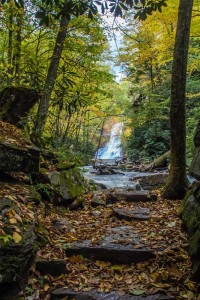 The bridges are mighty structures, supported by enormous beams and enclosed on both sides with log railings. They should have at least a fighting chance if Little Stony floods again.

Tri-State sought to restore not just access, but also the character of that original trail. The countless stone steps seem at home here and so will the bridges once they’ve been smoothed and stained by a few Giles County winters. And, just like the old trail, there are plenty of roots and rocks to trip over and slick spots to slip on.

The closer the trail gets to the big waterfall, the more work there was for Dundas. Here the trail clings more desperately to the steep banks of the gorge. Raised stone walkways, held together with steel pins, were built to make it passable. But the rougher the terrain gets, the more impressive 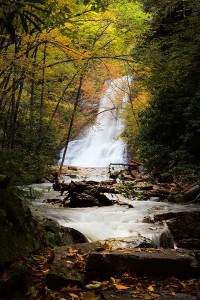 the sights. Furious white water rips between boulders to fall churning into a pool below. Up ahead, a small stream tumbles down the side of a cliff into Little Stony.

Finally, the upper and Lower Trails meet and ramble on to a stunning climax. Vegetation and an enormous boulder conspire to hide the falls from sight for as long as possible. When hikers round the boulder, the Cascades suddenly appear, roaring for attention.

The waterfall reigns in this bowl-shaped arena it has carved from the mountain. Little Stony’s rushing waters leap from the edge, cascading down the rock wall and landing in churning, misty turmoil in the pool below. From the rocks midstream or the observation deck near the top, the sight is spectacular enough to merit the thousands, if not millions, of photos that have been taken.

Time to go home. Tradition demands that the Upper Trail be taken back. From its lofty perch on the side of the gorge, it provides hikers with a new perspective of Little Stony. Its direct route is an asset now, as it leads the weary back to their cars and a cold drink in Pembroke.

How to Find It
Find the trail head at the upper end of the parking lot. The Cascades National Scenic Trail follows Big Stoney Creek upstream, eventually forking into an upper and lower trail. If the lower trail is open, take it because it is definitely the more beautiful of the two. The upper trail ascends the gorge, continuing to follow the stream, albeit at a distance. It eventually descends again to the stream to meet the lower trail. The lower trail follows the stream closely past beautiful cascades and pools. After the trails rejoin, they snake their way through the narrow gorge between high cliff walls. After passing an old stone building, the falls come into view. Total hike is 4.0 miles round trip over sometimes steep terrain on a sometimes rough and often muddy path.

Driving Directions
Take exit 118 I-81 north on US-460, making sure to use the bypasses around Christiansburg and Blacksburg. After 26.6 miles turn right on Cascade Dr (SR-T623) in Pembroke. The entrance is in 3.3 miles. 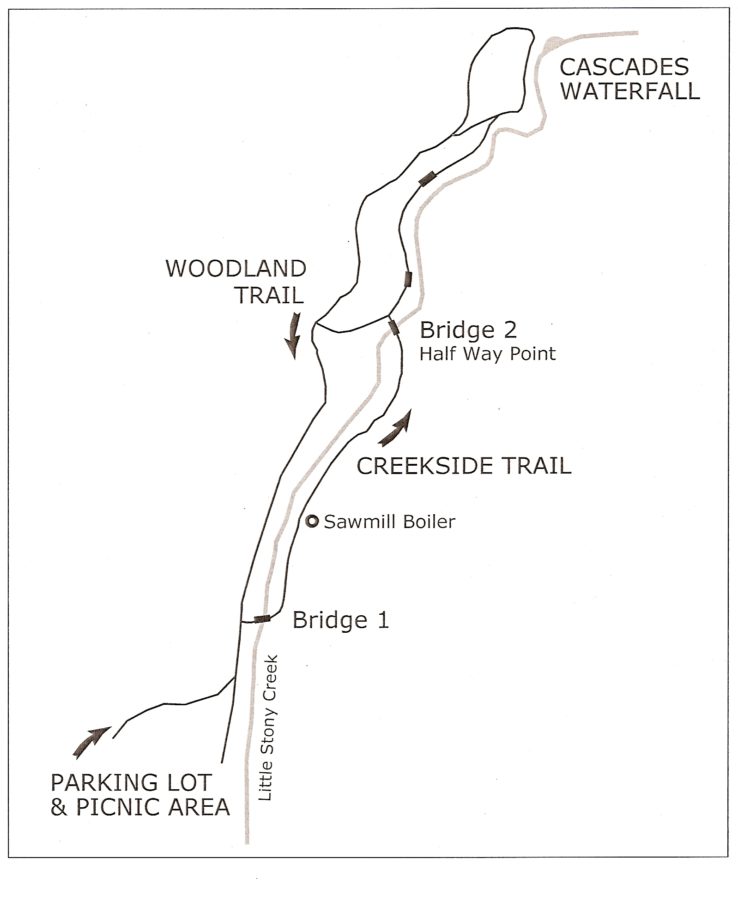