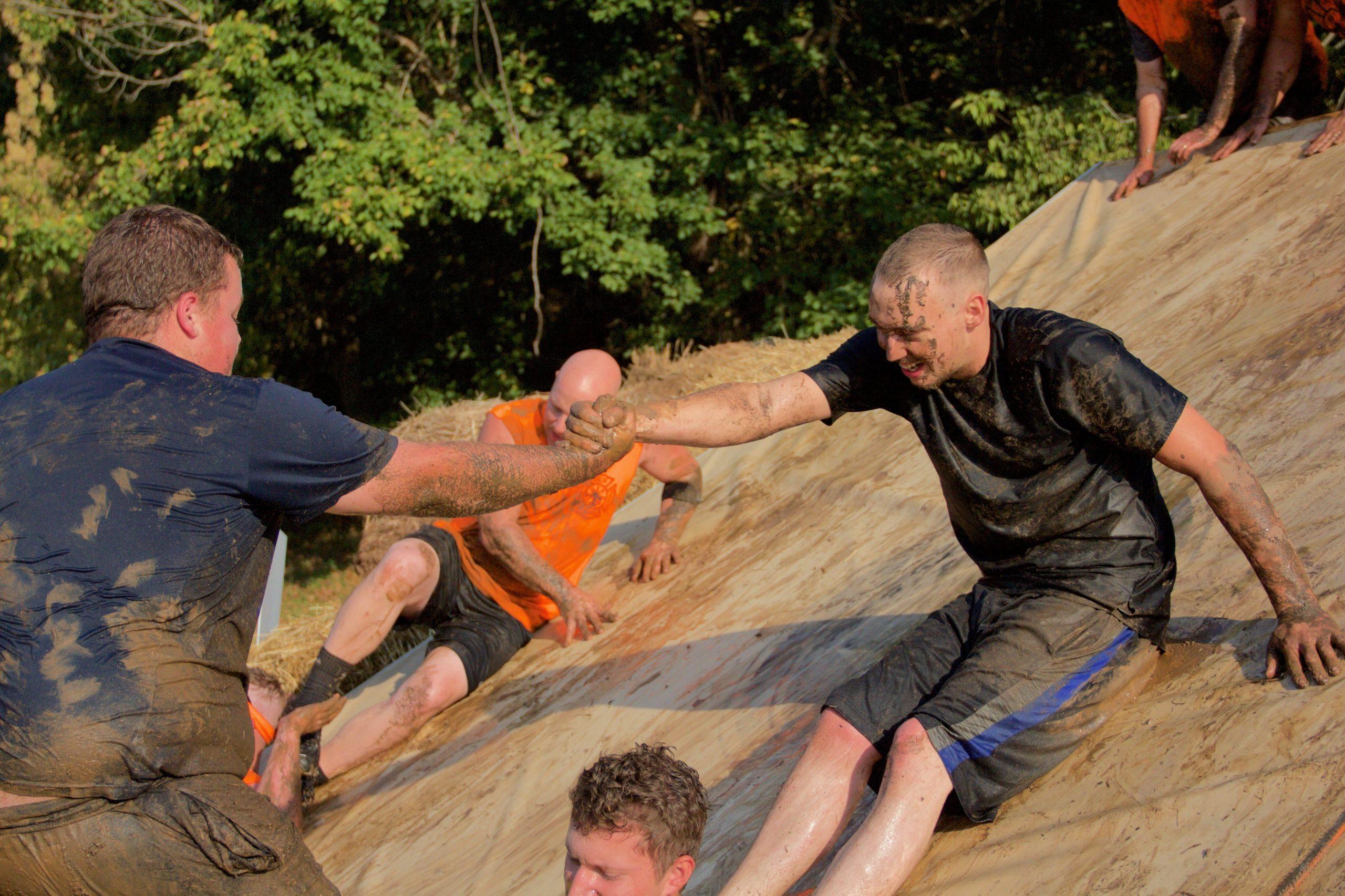 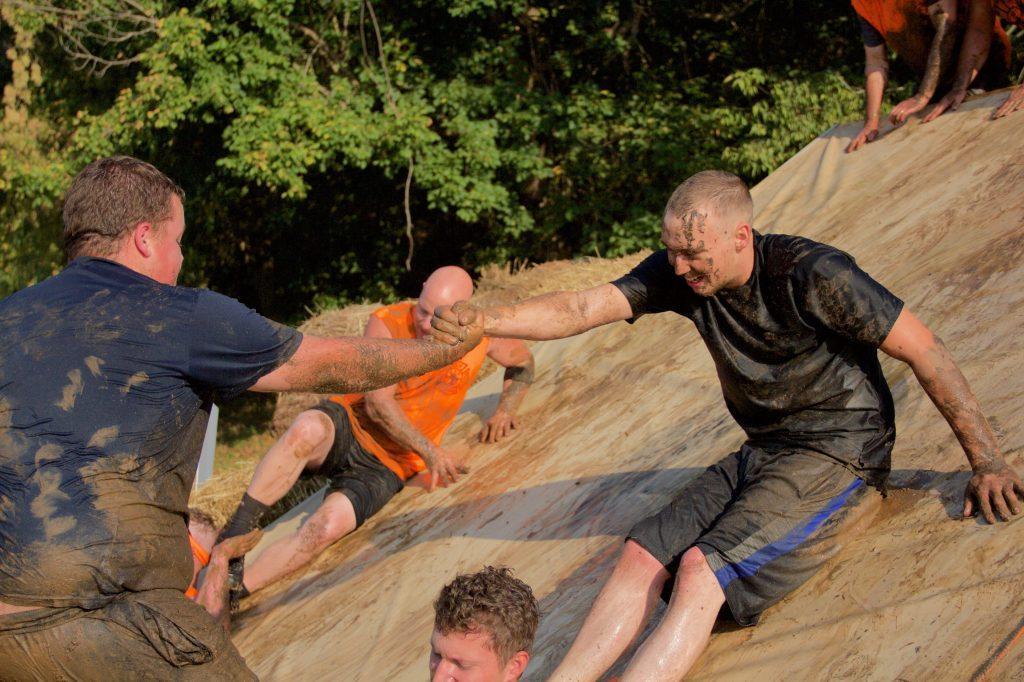 Muddy ACCE Race participants help each other, and thanks to their entry fees, Giles County, Va. students. Photo by Alisa Moody for Giles County Tourism

Giles County, Va.’s defining characteristic is the New River, which flows for 37 miles through this part of southwest Virginia. It comes in and goes out, and so too do the county’s residents, to get to work. The county is a cooperative part of the New River Valley, which includes counties in Virginia and southern West Virginia that work together and share the benefits, but at times, Giles County does have to look out for itself.
As it grapples with an aging population, questions turn to what this county wants to be and do. It has been a bedroom community, home to the cast and crew of “Dirty Dancing” in the 1980s and lately, a conduit through which goods, services and people pass. There’s a limestone mine and plenty of outdoor tourism opportunities. But the county remains at a developmental crossroads.
“We have a large commuter population, they’re going to Radford, Blacksburg or Christiansburg,” said Cora Gnegy, the county’s tourism marketing director. The neighboring city of Blacksburg is home to Virginia Tech and Radford University is in Pulaski County, to the south, both heavyweight employers. “At lunchtime in Pearisburg (the county seat), it’s not hard to get a table at a restaurant because they aren’t bustling, the jobs just aren’t here.”
Part of that is because of geography and topography.
Virginia’s Mountain Playground is just that — mountainous. Add in that one-third of the county is part of the Jefferson National Forest, and that limits industrial development space.
“We’re limited with large spaces that could be developed for sites,” Gnegy said.
And although the county’s population has remained at 16,000 – 17,000 residents for the last 60 years, it’s a changing demographic.
“We have a stable population but while our numbers have stayed the same, we’re much older, so our average age is above 60,” Gnegy said. “While we’re still around 16,000 people, we’ve continuously gotten older, and that changes your workforce dramatically.”
Giles County is left in flux, trying to figure out what economic growth to pursue and how best to prepare a workforce for those as-of-yet undetermined industries. Onward NRV, the New River Valley’s economic development organization, has targeted advanced manufacturing, food processing and agribusiness, information technology and unmanned systems as primary industries it sees flourishing in the region, but Giles County remains less suited for many of those than others in the region.
“Do we keep pushing outdoor recreation, with the amenities and the assets that we have and develop around those? Or do we start building buildings and recruiting, doing things like more traditional economic development?” Gnegy said.
The county has capitalized on what it has with the New River, maintaining 13 boat landings throughout the county.
Giles County sees opportunities for outdoor recreation gear manufacturers and attractions. The county has a few providers, but they are somewhat limited by capacity, so recruiting more outfitters, and a homegrown provider for equipment, is high on the county’s list of priorities.
“Say you have a family reunion and want to go for a big bike ride,” Gnegy said. “You could go to our outfitter but then you might only have enough bikes for half of your people. So, what do you do then? Go to Wal Mart and buy some bikes?”
Giles County’s strategy has been to grow from within, encouraging entrepreneurship from residents and their friends.“What I love about Giles is that there’s an idea and it usually stems from a current business owner or resident that has been affected by it,” Gnegy said. “We like to support them with the resources or the knowledge that we can as the county to build grassroots economic development.”
A new resort along the river came from a connection the owner of the county’s primary outdoors outfitter had with a friend looking for a place to build.
“That wasn’t us out there recruiting at trade shows, that’s just fostering opportunities,” Gnegy said. “We supported them and that turned into an almost $3 million investment in the county.”
Regardless of what industries develop in Giles County, qualified workers will have to be a part of it. That’s where the county’s ACCE program —  Access to Community College Education — comes in. The program, now in its seventh year, covers two years of tuition at New River Community College. Funding, nearly $900,000 over seven years, has come from the Muddy ACCE Race, a 5k obstacle race, heavy on mud. More than 3,000 students, one-third of Giles County’s high school graduates over that time, have participated in the program.
“We’re seeing 26 percent of kids going on to post-secondary education who weren’t before,” Gnegy said. “Even more students are aware that there’s more out there for them if they want to take advantage of it.”
By exposing Giles County students to more opportunities, the county may be able to anticipate what its best course forward is, again, by relying on those who know it best.
“There’s an underlying feeling here that we don’t have to be what we’ve always been, which has been very interesting,” Gnegy said.
“Instead of working on equipment for coal, we’re working on equipment for agriculture, and that could be a future in solar farming, or hydroponics.”
https://www.naco.org/articles/fork-river-challenges-countys-economic-future
Share Post